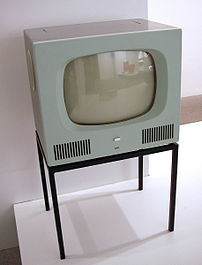 EDEN PRAIRIE, Minn., March 10, 2009 — A new
burglar-deterrent device boasts the world’s worst television
picture. “FakeTV” is not really a television at all, but
produces the exact light output of a real television set.
So, FakeTV fills a room with shifting, pulsating, fading and
swelling light in thousands of possible shades of color.
When a would-be thief views this light from outside the
home, it looks like somebody is home watching TV. That is
the point: FakeTV makes a home look occupied.

Everybody, including burglars, is familiar with putting a
light on a timer to make a home look occupied. FakeTV((TM)TM
takes that idea to a completely new level, because it looks
“alive.” When you see the light from a television coming
from your neighbor’s window, you automatically assume they
are home watching TV. Burglars make the same assumption, and
few burglars will target an occupied home. Police
departments stress that giving your home that lived-in look
whenever you are away makes it less likely to be
burglarized.
FakeTV is an effective burglar deterrent because it makes a
home an unappealing target. A sophisticated alarm system can
cost as much as a hundred times the under-$40 price of
FakeTV. Alarms do little to prevent a smash-and-grab
robbery. A FakeTV is thus a natural addition to an
alarm-equipped home. Nosy neighbors remain the best defense
against a daytime break-in. FakeTV works at night, when
neighbors are unlikely to see mischief afoot on your
property.

Now about that horrible television picture: The truth is,
the light from FakeTV is almost hypnotic to watch. You can
picture in your mind what sort of program it might be
simulating. News programs tend to be more static, and action
adventure movies are usually dynamic. Dramas more often than
not have many dark passages. Situation comedies are
monochromatic and animated films are vividly colorful.
Commercial breaks light up a room like fireworks. FakeTV
simulates all of these, serves them up at random, and never
repeats.

FakeTV has a built in light sensor and timer, so it turns on
at dusk and runs for a selectable number of hours. It
produces as much light as a typical television set, but
consumes just the power of a night light. Some people leave
the TV on whenever they leave home because they know it is a
great burglar repellent. FakeTV offers a far greener
alternative, and does not use up the life of the television.
One woman says she needs a television on to fall asleep, and
she now uses her FakeTV! The lack of a real picture is no
downside in her case.

FakeTV is available through Internet retailers and directly
from the manufacturer, Opto-Electronic Design, Inc. FakeTV
costs $24.99 if purchased from http://www.faketv.com using
the coupon code PICTURE. FakeTV is a trademark of
Opto-Electronic Design, Inc. FakeTV is covered by issued and
pending US and international patents. For more information,
visit http://www.faketv.com or call 1-888-621-5800

Andy was born in the Isle of Man and currently lives in Pittsburgh.
Known globally as a willing source for tech news and views, Andy takes great pride in consultation and education.

Should his schedule permit, Andy is available to help you with your SEO and Web Analytics needs.