One of the biggest names in the Smart Watch business right now is Samsung with the Galaxy Gear. The Galaxy Gear connects to your Samsung phone via NFC and Bluetooth and keeps you connected to your phone without having to continually pull your phone out of your pockets. Is it worth all the hype or just a gimmick? Lets find out. 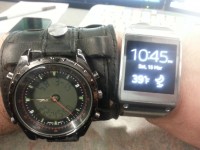 The Galaxy Gear is easy to set up.  Start out by downloading the Gear Manager for the Google Play Store.  Once installed turn on NFC and Bluetooth. Turn on the Galaxy Gear, place it in the Charge/Sync holder  and put the phone and the watch next to each other. Click the check mark on the Gear and then Okay on the phone and you have paired your devices. 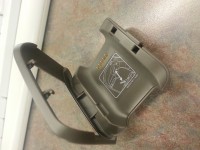 Once you have the Gear paired to your phone you have lots of options to choose from for what you would like your Gear to do.

Once the home screen is all set, you can check out the per-installed apps. Some of the apps you can use with the Galaxy Gear include S Voice, Voice Memo, Picture Gallery, Media Controller, Camera, Contacts, Dialer, Find My Device, Call Logs and Pedometer.

One of the nice features of the Gear is the built-in speaker that is in the watch band, with that and the built-in mic you can make calls directly from your phone.  Call clarity is surprisingly clear for sound coming from a watch band and the person on the other line can hear you clearly from the built-in mic.

The Gear also has a 1.3 MP Camera built into the watch band. While not being able to take the best pics, the camera is adequate for on the fly pictures. The camera can not be used for video conferences.

Inside the Gear Manage app is a tab to add additional app’s to your Gear. They have 7 different categories to choose from. Entertainment, Finance,  Health/Fitness, Lifestyle, Social Networking, Utilities, and Clock.

The Galaxy Gear can double as your workout partner, saving you from having to buy a separate device to track your jog or workout. There are multiple different app’s for you to choose from depending on the type of workout you are doing.

If you happen to listen to the media on your phone, you no longer have to be right next to it to be able to change songs. The Gear allows you to Play/Pause, FF and RR, and turn the volume Up and Down.

Get notifications from your text messages and emails with just a glance of the Gear. If it’s important you can pick your phone up and reply or just wait till later if you feel the need.  With apps that are available from Samsung you can also get notifications from Facebook  and Twitter.

The Gear works well as a Smart Watch/ Workout Tracker/ Media Controller.  The battery life all depends on how you have your phone set to sync with things such as Weather, Media, Messages and Video and Picture taking. I would get a full day out of mine and charge it at night whether it needed it or not. This way I was always guaranteed to not have to worry about the Gear dying half way through the day.

The only downsides I found to the Gear are the fact that it is only compatible with Samsung Devices at this time, to charge the Gear you need to have the doc with it, and on a personal preference, I prefer a wider watch band. With the Gear having a speaker and camera built into the band, I am unable to change it out for a wider band.

The Galaxy Gear is available from Verizon Wireless for $299.99  and is available in your choice of  Mocha Grey, Jet Black, Oatmeal Beige , Wild Orange, Lime Green, and Rose Gold.

Overall, the Galaxy Gear is a nice add-on to your Galaxy Device.  If you are in the market for a new watch and have the extra money lying around be sure to head over to Verizon Wireless and pick one up.

Ben is a 911 Telecomunicator and a tech nut. Ben was born and raised in the Greater Pittsburgh Area. He reviews Verizon Wireless products for Techburgh.com and is the owner of Cerebral-Overload.com. His hope is to bring you the reviews you want to give you an informed decision on products you may be looking into.